Non-native, invasive species are an issue that affects all seven continents. Invasive species wreak havoc on natural ecosystems. Because these organisms are introduced so suddenly, they have no natural predators and often outcompete native species.

To understand the issue at hand, it is important to know the language around invasive species.

First, native species are species that naturally occur in an area. Over thousands of years, organisms in the same area evolve together to create an ecosystem where each organism serves a purpose. Through a system of checks and balances such as predation and evolving defenses, natural ecosystems find an equilibrium where no one species is entirely dominant.

Second, there is non-native but non-invasive species. This category encompasses most plants and animals that humans have introduced to new environments. For example, roses and tulips won’t survive outside of gardens, and most tropical aquarium fish wouldn’t be able to live in a cold Canadian river. Other introduced species, such as tomatoes and wheat are a beneficial food resource. None of these organisms are causes of concern.

Finally, we reach the true problems, invasive species. Invasive species are non-native species introduced to areas outside of their native range, cause economic or environmental harm, and can spread rapidly to new areas.

Many invasive species introduced to North America, such as spotted lanternflies, LDD moths (formerly called gypsy moths) or zebra mussels are spread further by accident, hitching rides on vehicles, watercrafts and other equipment. Other invasive species are intentionally introduced to new areas, such as English ivy, round goby, red eared slider turtle through the dumping of garden waste, bait buckets, and release of unwanted pets escape from peoples’ gardens and establish in the wild.

Pet or aquarium release is a large contributor to new invasions. Approximately a third of invasive species that threaten native aquatic environments are from the aquarium trade.

For example, well intentioned goldfish owners may release their fish into storm water ponds or lakes. Goldfish are cold adapted and have thrived in many waterbodies around Canada, establishing self sustaining breeding populations. Goldfish can grow over 45 cm in the wild.

So herein lies the real questions. Why should we care? How do they affect us? And what should we do about them?

Continuing with our earlier example, goldfish living in Canadian lakes have no natural predators, so time and energy native fish invest in predator avoidance, goldfish can invest in feeding and reproduction. This massively upsets the fish community and can lead to native fish being severely depleted in numbers.

Invasive species are not just a threat to our environment, but also to our economy. Worldwide, billions of dollars are spent yearly to monitor, control, and eradicate invasive species.

So what can we do to help? As a principle, prevention is the best cure to any problem. As pet owners, following the principles of Don’t Let it Loose. If you are facing a situation where you can no longer care for a pet, you can consider these four options.

Pet owners, aquarium hobbyists, and everyone else worldwide must work together to prevent the spread of invasive species. By staying vigilant and following the rules of Don’t Let it Loose, we can keep our pets and the environment safe. 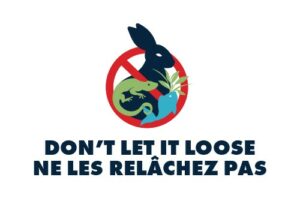