What is Don't Let It Loose?

Invasive species are plants and animals that are not native to Canada and can have serious impacts on our environment, economy and human health. Some of Canada’s most harmful invasive species came from the intentional, improper disposal of aquariums and terrariums into our waters and other outdoor spaces.

Releasing pets into the wild is inhumane, dangerous and illegal

Some people believe that when they don’t want their pets any longer, the best thing to do for the animal is to release it into the wild. However, this is cruel, dangerous to the environment, and illegal.

Water gardeners, aquarium and terrarium owners can select from a variety of aquatic plants, invertebrates, reptiles and fish. Unfortunately, some of these exotic species have the potential to become invasive. When no longer wanted, pets are sometimes let loose into nearby water or woods, and plants are dumped into ditches and ponds, where they can have huge ecological and environmental impacts.

It is important for pet owners to understand the lifespan and long term needs of all pets before considering purchase or adoption. If you still end up with a bully in your aquarium or a Red-eared slider turtle that has outgrown its tank, be aware that letting plants and animals loose into the wild is not an appropriate solution.

Most pets don’t survive in the wild – some die by being killed by predators or hit by cars, and others die of starvation. It is inhumane to release an animal into an environment it is not accustomed to. Releasing a pet into an unsuitable habitat is also considered animal cruelty and charges can be laid.

Some exotic pets are able to thrive and reproduce in their new environment. Once established, they can take over their new habitat, reducing native populations and changing the structure of the ecosystem. Even if your aquatic pet is known to be native to the local environment, it should still never be released, as it may introduce diseases or invasive parasites into the local ecosystem.

Many animals and plants sold for aquariums and water gardens are not native to Canada. Some owners think that releasing a pet that becomes too large, too difficult to care for or that they no longer want is the most compassionate thing to do. This is not true.

Domestic pets generally do not have the survival skills to live beyond their tank or pond. They can starve to death or may be eaten by predators in the wild. In some cases, they may survive, reproduce and spread, becoming invasive to the area they have been released in. Even if your pet is native to the local environment, it should never be released, as it may be carrying diseases or parasites. 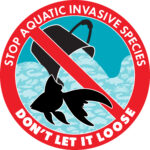 Goldfish have been introduced worldwide. They are established in locations throughout all provinces of Canada and all of the United States except Alaska. 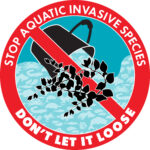 Fish aren’t the only problem! Small pieces or seeds from water garden plants can also thrive and cause an invasion if released. Invasive plants, such as flowering rush and pale yellow iris have been introduced throughout Canada.

What you should do instead

Be a responsible pet and plant owner and care.

Research other places that may be able to provide a new home for your pet, such as animal shelters, animal sanctuaries, humane societies, science centres, zoos, aquariums, schools or community organizations.

The CCIS has developed new Don’t Let It Loose logo with the help of our Chapter Network, that addresses both aquatic and terrestrial species, as well as a set of branding guidelines. These guidelines

We serve as a national voice and hub to protect Canada from the impacts of invasive species. With members and chapters from all corners of Canada, along with governments and businesses, the CCIS brings people together to build practical solutions to prevent the spread of invasive species.