Wild pigs have been in the spotlight, most recently  due to the breaking news that a sounder (group of wild pigs) has been discovered in Elk Island National Park. 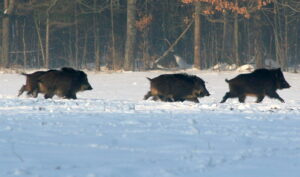 Wild pigs are descendants of Eurasian wild boar brought over from Europe and Asia, and domestic pigs. Farmed boar either escaped captivity or were released and interbred with domestic pigs.

The result of this interbreeding is a highly successful invasive species that has colonized large portions of the southern US and is now wreaking havoc in western Canada.

Opportunistic omnivores, wild pigs will eat whatever they can find. This includes farmed crops, bird eggs, roots, amphibians, and anything else that crosses their path. Due to their appetite and their love of digging and wallowing, they’ve caused massive economic and environmental damage to the areas they invade.

Any web search will outline just how destructive this invasive species can be. However, what makes them unique is their ability to thrive in an extreme variety of climates.

Historically, invasive species native to warm areas tend to be limited in their northern expansion by temperature. Eurasian wild boar range from north Africa to western Europe, with most of their population found in broad leaf deciduous forests near the southern end of their range. 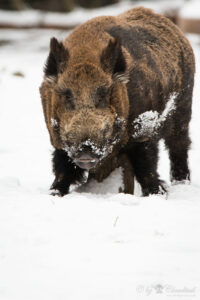 In contrast, the Canadian prairies are known for having cold, arid winters with little tree cover for shelter. It is common for prairie provinces to have winter days under -20°C. In February 2021, Nipawin Saskatchewan broke an 85-year-old record, recording a temperature of -43.9°C.

How is it that an animal native to warm climates have adapted so well to the freezing temperatures when most cannot? Wild pigs have demonstrated a perfect combination of physical and behavioural adaptations that have allowed them to thrive where others have failed.

First, pigs in colder climates have developed a thick, shaggy coat of hair that helps insulate them from the cold. Like other cold adapted animals, pigs grow a thicker winter coat and a lighter summer coat.

Continuing with physical adaptations, pigs are excellent at digging and rooting through the snow. Their excellent sense of smell helps them find food hidden under snow. Being omnivores, anything they find it on the menu. They aren’t picky!

Finally, the ingenuity pigs are famous for displayed in the North. Pigs have been observed creating “pigloos”, which are burrows they make in snowbanks. The insulating effects of snow retain warmth so they can safely wait out blisteringly cold stretches. Pigloos made of cattails in marshy areas have also been observed. Living in groups helps create extra warmth for the entire sounder. 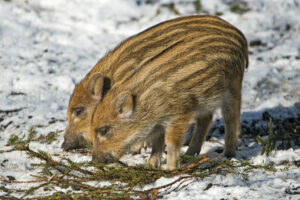 Due to their nocturnal nature and elusive nature, wild pigs are even harder to spot in the winter than they are in the summer. However, it is highly encouraged to report any sightings or signs of pig occupation in an area.

For more information on how to report wild pigs based on your individual province or territory, follow the links on our website.

Despite efforts in Canada and the US to manage this species through hunting programs, wild pigs have shown a surprising ability to adapt quickly to avoid humans and the threat of hunting, making it even more difficult to detect the species. Considering this, hunting is no longer a viable solution for eradicating wild pigs. Experts have been working on implementing methods to capture entire sounders to better manage wild pig populations.

Remember, to protect our environment and our economy, always squeal on pigs!